Do you enjoy reading fantasy literature but too often feel that the protagonists walk away from it all without taking a proper beating? Don’t get me wrong; we want the protagonists to succeed. You just don’t want it to be a cake walk for them.

If this sounds like you then I have a recommendation I think you’re really going to love. The Sacred Throne series by author Myke Cole is a dark fantasy set in a world of Cole’s own devising. On the surface, the world is peaceful, thanks to the Emperor; a near mythical figure of god-like power. It is through the benediction of the Emperor and the faith of the people that demons are kept out of our world trapped behind the Veil for all time.

Only one thing can allowa demon access to the world. Magic. Magic is dangerous, deadly, and corrupt. Anyone who practices magic i a threat to the world and should be killed on sight. This is the only way to keep the Veil knit and keep the demons from the world. It is the duty of the Pilgrims as well as every good citizen to ensure that the Veil stays close and any deviance is reported and punished.

This is the world our protagonist, Heloise Factor, inhabits. She’s a young girl on the edge of adulthood. She spends her days running errands for her mother in town, helping her father at his trade, and secretly pining for her best friend; the blacksmith’s daughter. The only plans in her future are getting married to whichever boy her parents arrange and living out the rest of her life in her sleepy town running her household and raising her children.

Fate has other plans in store for Heloise though. When a demon tears its way through the Veil and into her small town Heloise, compelled by fear and love, will don a suit of powered armor to save her love, her family, and her village. Through the course of three books Heloise will battle doubt, demons, the patriarchy, and her fellow man. She will face adversity and claw her way through. She will struggle through the swamps of loss, rage, doubt, depression and a few actual swamps too. 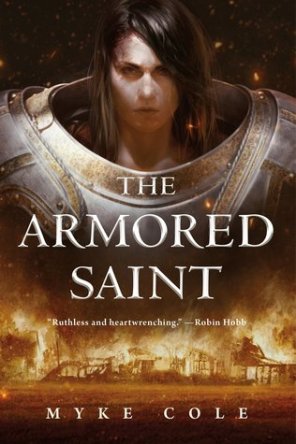 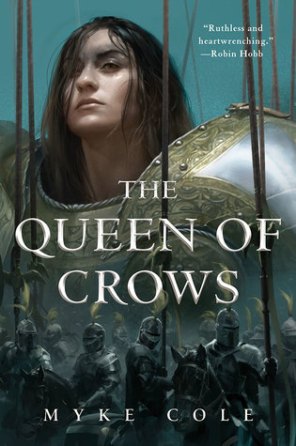 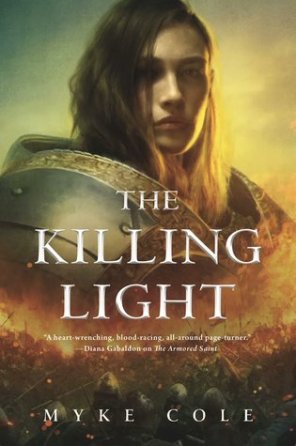 Starting with book one, The Sacred Throne, Heloise goes through a brutal journey on her road to save her people and herself. Her path is dark and fraught with danger and she pays a steep price for every victory along the way. Myke Cole creates a rich world with a diverse set of people that you will discover right along with Heloise.

Cole’s writing style is often blunt and to the point, but far from being shallow or unimaginative. He is often able to relay complex situations and emotions in such a direct manner you’ll often feel just as gut-punched as the characters. His battle scenes will easily stand out in your mind and his style of writing allows you to feel the chaos of the fight while still understanding Heloise’s place within the battle.

If you’re a fan of dark fantasy, high stakes, and harsh consequences you’ll enjoy this series. Fans of the Warhammer and Warhammer 40K universes will especially enjoy these books. So run out and pick up The Armored Saint, The Queen of Crows, and the incredible finale, The Killing Light at your favorite book seller and let me know how you liked them.