I am partnering with Xpresso Book Tours today to bring you Off the Record by Skye McDonald. Keep reading for an EXCLUSIVE EXCERPT and a GIVEAWAY! 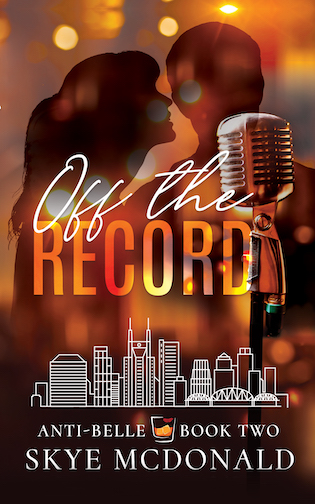 Not even Nashville’s summer heat can match the sizzle of first love.

Nick Field’s motto is “live free.” The huge promotion at work is great, but producing a pop star’s debut album isn’t going to change his life or anything. There’s always room for unwinding and having fun.

Mel Thomas works 24/7 as the media manager to America’s newest heartthrob. Building his image and writing her career make-or-break article are the stories of the summer. There’s no room to go off script.

Ten years ago, Nick and Mel were high school sweethearts. Reunited by chance, what should’ve been ancient history reignites into a passionate present. Too bad there’s no future in it.

Melody. The name tickled the hair on my neck and made me forget every single name I’d just committed to memory.

Peter said, “I think she was talking to the receptionist.” He jogged to the hallway calling, “Hey, Miss Twitter! You’re wanted in the lounge.”

I scratched my neck to make the tingling stop. “Did you say Melody?” Shut up. There’s no way it’s her. Focus.

“Yeah. She’s a hell of a writer and the best damn girl- friend a guy like me could ask for.” Jesse shrugged like we shared a joke.

The tingling started to close my throat. “Writer?”

But Peter reappeared, and the woman who followed him in confirmed every ounce of adrenaline coursing through my system. My pulse beat in my ears and muted the scene as her ocean-blue eyes landed on me.

Suddenly I was eighteen again, rocked by nostalgia and memories that had been locked away for a decade.

I saw the shock in her gaze, but she rearranged her expression to a placid mask fast. Her cool stare under those black—Black??—bangs made me hold my tongue and remember where we were.

His girlfriend. Jesus, I didn’t see this coming.

“Hi.”Her soft greeting turned my mouth to dust. I wondered if it was her hand or mine that was so cold when I reached to clasp her outstretched palm. I’m not sure if I spoke, but after a beat she withdrew.

Easy, man. Calm down. Jesse’s debut album is why you’re here. Don’t make a scene. I turned to Jesse. “Should we get started?”

While he met the band and started rehearsing, I dropped into my chair behind the sound board and rolled my shoulders. The album is all that matters. All. That. Matters.

Skye spent a lot of her adolescence dreaming about living in a hip, urban town full of adventures that occurred outside of the local mall. (Hers was Rivergate, in case you know Nashville well!) Now that she’s been living away from Nashville for years, the once sleepy Southern city has become just that place, and she returns to visit whenever she can. Her seven-novel-and-growing Anti-Belle series is centered in her hometown, partly as a homage and partly because these days Nashville is too hip to ignore.

In the real world, Skye is an English teacher in Brooklyn, New York, and has lived there long enough to consider herself a true New Yorker—even though she proudly cheers for the Tennessee Vols (her alma mater) and loves being a GRITS (Girl Raised in the South).

Skye’s philosophy is to live with your heart and mind open. She believes in the beauty of this world and seeks adventure and joy as a daily practice. If “Life is what happens while you’re busy making other plans,” as John Lennon said, then she’d rather leave the schedule open and let life happen.