I am so excited to be part of the Blog tour for Beth Merlin’s latest novel, Breakup Boot Camp!!! Thank you to Xpresso Book Tours for letting me join in on the fun, and for sending me a free eBook for me to review! 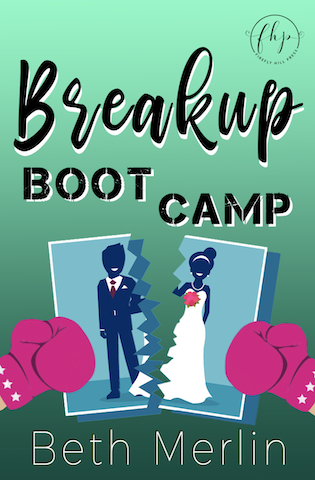 “Merlin gives off Sophie Kinsella and Emily Giffin vibes only with an execution of plots that is all her own….Beth Merlin is totally going to grow in popularity. I’m calling it.” – Book and Broadway

After weeks of training to whip Joanna Kitt into shape for her big day, her picture-perfect engagement to her high school sweetheart is torn in two, and Joanna is left out on her perfectly toned rear end. To put the past and her heartache behind her, she sets off for two weeks at the renowned Retreat House Breakup Boot Camp in Topsail Island off the coast of North Carolina.

Despite her sadness, Joanna throws herself into the experience hoping surfing, yoga, spa treatments, meditation, and talk therapy will be enough to help her get over the one man she’s ever loved. But she soon learns the Boot Camp is only the first step to healing her broken heart. Joanna will have to come to terms with the career she abandoned, the losses in her life she never fully accepted, and the role she played in the ending of her relationship. .

When she meets Todd Aldrich, the handsome and mysterious hotel chef, she has the chance to take her renewed heart out for a test drive and see if she is ready for new beginnings and new love.

Will 12 steps be enough to get her life back on track? Or will her getaway to get over him prove healing the heart takes a whole lot more?

This was SUCH a fun read! I need to start off by saying that the author writes some truly beautiful descriptions and prose! Often I get bored when authors go on and on with describing things, skimming over them completely more often than not. But Beth Merlin just did it so wonderfully that I was sucked right in!

Joanna is such a great character. She is about to be married to her childhood sweetheart – the only man she has ever been with – and she seems so happy. Except once everything hits the fan, she realizes that happiness was pretty much all on the surface. We don’t see her problems laid out right away; no, we actually have them revealed to us slowly as Joanna herself comes to acknowledge and confront them. It’s all unfolded so perfectly that you never feel like the author is trying to keep you in suspense, but that she is having you learn right along with Joanna herself.

The romance portion of this story is not the driving plot line at all, and I love that fact. In fact, it takes a backseat to Joanna’s overall journey and growth as she recovers from having her life turned on it’s head. In fact, I really wasn’t at all attached to Todd – our love interest – simply because that was not the part of the story I was keen to get on with. He was nice enough, don’t get me wrong, but for me it was more about Joanna and less about romance.

I really loved this book. I will definitely be checking out more by this author, because if Breakup Boot Camp is any indicator, I am going to love her other works!!

Beth Merlin has a BA from The George Washington University where she minored in Creative Writing and a JD from New York Law School. She’s a native New Yorker who loves anything Broadway, rom-coms, her daughter Hadley, and a good maxi dress. She was introduced to her husband through a friend she met at sleepaway camp and considers the eight summers she spent there to be some of the most formative of her life. One S’more Summer was Beth’s debut novel.