I’m super excited to announce the release of Corrupted Enchantment: When Fairy Tales Collide by C. Penticoff. Fairytale Retellings are my favorite subgenre, so I am soooo stoked for this book! Keep reading for an exclusive excerpt and a giveaway! Fans of Once Upon A Time will be obsessed with this series!

Welcome to Enchantia, where all your favorite fairy tale characters live happily ever after… That is, until a dark spell takes over the land.

Robin Hood: Everyone at school seemed to be scared of me. What? Had they never met someone who’d been in jail before? Whatever. I liked it that way. I didn’t need friends. I just needed to be left alone so I could get back to what I was supposed to be doing…stealing from the rich to give to the poor. Something was getting in the way of my usual goal though. There seemed to be a spell looming about, and I knew exactly who was responsible for it– Presidential candidate, Rumpelstiltskin.

There was also the Peter Pan problem. Now that I was back, I could tell he wanted to approach me, but there was nothing he could have done to make me forgive him. He could bat his pretty little eyes all he wanted. The ultimate betrayal wasn’t something I took lightly.

Rumpelstiltskin: I didn’t care what the three fates said about that filthy little brat, Robin Hood, being my undoing. I would spill her blood to change that destiny. Now that I had the power of the Presidency in my palms, I wouldn’t let anything stop me from achieving what I set out to do.

In the darkest and dampest part of the Cave of Graves, I quivered as I awaited the Three Fates. I stroked the stony wall with the tips of my fingers as I walked through it. My undying desire to power over everyone around me had finally brought me to a desperate place for answers. I had everything I needed in its proper place to summon the Fates. There was just one final step before I looked destiny in the face——a prick of the finger. Without flinching, I pierced my pointer finger on the abandoned, ancient golden spindle of Olympus. Placing my oozing wound over the spinning wheel, my crimson blood trickled from my hand and onto the thread. The moment my fluid touched it, the entire line of thread soaked itself in blood, followed by a sound that sprung me off my feet.

A chilly gush of wind plummeted me backwards and onto the ground. Without time to react to the fall, a chilling sensation on my toes made me squirm. I looked down in time to see dozens of beetles crawling out of my boots and up my legs, biting and scratching their way up. I screeched and slapped myself on every part of my body, and the beetles suddenly vanished.

Before I could process what happened, my ears were filled with cackles somewhere up ahead. The noises were so loud, yet so close, I couldn’t tell if the voices were inside the cave or just inside my head. The cackles became louder and louder every second, and I screamed to try and muffle the shrieking sound. I covered my ears, but the cackles only grew larger, when suddenly…the cave fell silent. My shaking knees almost brought me to the ground as I carefully uncovered my ears.

Get it together, Rumpelstiltskin, I told myself.

Despite being a dark and sinister man myself, even this was enough to send chills down my spine. One woman’s cackle returned, but this time, I was certain the sound was in the cave, and not in my head. A candle lit in front of me, unveiling a dark, shadowy figure with cherry red eyes, matching the blood I spilled to summon them. The figure held her candle up to her mouth and gently blew. The flame grew in size, revealing her two sister Fates.

“You call us here to learn of your fate. Is that true?” the first Fate asked.

I was startled by her raspy and almost seductive voice.

The second Fate whipped around me and to the spindle, grabbed the thread, and was back in her spot in a matter of seconds. The wheel spun and spun faster than I had ever seen the wheel turn. Blood-soaked thread flew all throughout the cave, twisting and turning around me; and the third Fate reached a limb out to grab one part of the thread. The first Fate cut one part of it off and stretched it as far as it would go.

“You’re destined to rule over all of Enchantia with unlimited power,” the second Fate spoke.

I couldn’t hold back the grimace that spread across my face.

“Endless support will pour from your people and into your throne.”

Laughter spilled from my belly and out of my mouth, and I could feel goosebumps dancing on my neck.

“But, don’t get too comfortable on your throne.” Those words alone ripped the laughter right out of me. “For a young Blue Elf will be your undoing.” The third fate flicked the thread and blood splashed onto my nose.

My fists balled up as I felt the blood rush to my head.

“Her strength will lie in her powerful magical abilities, and the power of fighting alongside her friends. Particularly, a young man will be her greatest ally,” the third Fate warned.

“Who is she!” Spit flew out of my mouth. 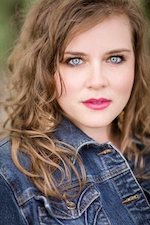 C. Penticoff lives in the Pacific Northwest with her husband and two young children.

When she isn’t writing, she is working her business, A Novel Connection, in hopes of helping to #SupportIndieAuthors.