The Bone Charmer was the feature book in Unicorn Crate’s May box, and my first impression was the the cover alone was beautiful. Then I put it on my TBR shelf and forgot about it for almost 3 months, until I picked it up at the suggestion of a friend. I have to say, this book was FABULOUS. I feel like it didn’t really get any love on social media and that is such a shame! I’ll go into more detail in my review below, but first let’s get a summary of the plot! 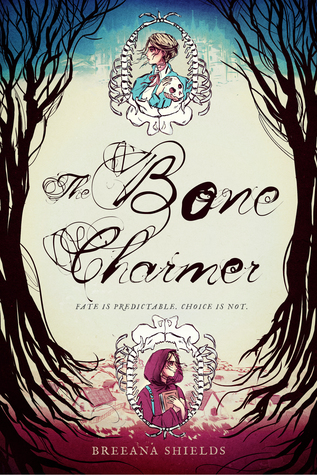 In Saskia’s world, bones are the source of all power. They tell the future, reveal the past, and expose secrets in the present. Each village has a designated seer who performs readings for the townsfolk, and in Midwood, the Bone Charmer is Saskia’s mother.

On the day of her kenning—a special bone reading that determines the apprenticeships of all seventeen-year-olds—Saskia’s worst fears come true. She receives an assignment to train as a Bone Charmer, like her mother, and even worse, a match-making reading that pairs her with Bram—a boy who has suspicious tattoos that hint of violence.

Saskia knows her mother saw multiple paths for her, yet chose one she knew Saskia wouldn’t want. Their argument leads to a fracture in one of the bones. Broken bones are always bad luck, but this particular set of bones have been infused with extra magic, and so the break has devastating consequences—Saskia’s future has split as well. Now she will live her two potential paths simultaneously. Only one future can survive. And Saskia’s life is in danger in both.

So the book follows both Saskia the Bone Charmer and Saskia the…not Bone Charmer (I won’t spoil her alternate path), and the repercussions of her choices in both paths. I was worried that this method of storytelling would get messy or confusing, but the author handled it BEAUTIFULLY and the story was riveting.

In her Bone Charmer path, Saskia is matched with a boy she doesn’t trust – Bram – and she doesn’t want to be paired with him any more than she wants to be a Bone Charmer. In her other path, she gets the job she wants and the boy she thinks she loves – Declan – but nothing is as it seems. Bone Charmer Saskia is oblivious to her split life, while the other is not only aware, but is working with her mother to try and fix things. Why? Because a split reality can’t last, and both Saskias risk being lost forever if they don’t repair the break.

But it’s not just the split reality that is a risk here. People are being violently killed left and right, bones are being stolen from their resting places, and dark magic seems to be afoot. I was constantly caught off guard and the intrigue kept me turning the pages with a need to know who was behind all of this. I was completely enamored of this story and finished it all in one sitting! You can’t help but root for both Saskia’s and it becomes harder and harder to know which life you want to have stick for her. I will say, however, that I adored Bram from the get-go; I am a sucker for those dark broody types.

Another aspect of the story that I really loved was the magic system. In this world, bones are the center of everything. It’s actually a little dark and eerie (especially their version of graveyards), but so interesting. Beyond the bones, we also have the tattoos. So in this world, tattoos appear on the skin during highlights in someone’s life. This can be a traumatic experience, an embarrassing one, a memorable one, a great achievement, etc. These tattoos manifest in different colors based on what caused them, and the design varies by the experience. Love is always manifested by a red tattoo around the wrist, one that can slowly appear or come on suddenly. I love seeing the different tattoos and what they all meant.

All in all, I really cannot recommend this story enough. It left off with the clear intent of a sequel, although one has not been announced as of yet. The ending had quite a cliffhanger, so I am dying to know what happens next! I encourage everyone to read this and review it so the author and publisher know we need more!! Trust me when I say you will want to read this 5-Star book!

If you have read this as well, please share in the comments below! I’d also love to hear about your recent 5-star reads!

3 thoughts on “The Bone Charmer by Breeana Shields”