I am a HUGE sucker for a good fairy-tale retelling, so when A Curse So Dark and Lonely by Brigid Kemmerer showed up in the February FairyLoot box, I was SUPER excited. Then I put it on my TBR shelf and forgot about it for 3 months. As one does. BUT I made it a goal to knock off a ton of books from my TBR list this last month, and I am so glad I did. As always, let’s get a quick summary before I start my review! 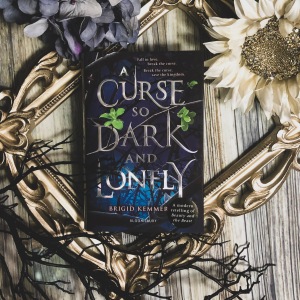 Fall in love, break the curse.

It once seemed so easy to Prince Rhen, the heir to Emberfall. Cursed by a powerful enchantress to repeat the autumn of his eighteenth year over and over, he knew he could be saved if a girl fell for him. But that was before he learned that at the end of each autumn, he would turn into a vicious beast hell-bent on destruction. That was before he destroyed his castle, his family, and every last shred of hope.

Nothing has ever been easy for Harper Lacy. With her father long gone, her mother dying, and her brother barely holding their family together while constantly underestimating her because of her cerebral palsy, she learned to be tough enough to survive. But when she tries to save someone else on the streets of Washington, DC, she’s instead somehow sucked into Rhen’s cursed world.

Break the curse, save the kingdom.

A prince? A monster? A curse? Harper doesn’t know where she is or what to believe. But as she spends time with Rhen in this enchanted land, she begins to understand what’s at stake. And as Rhen realizes Harper is not just another girl to charm, his hope comes flooding back. But powerful forces are standing against Emberfall . . . and it will take more than a broken curse to save Harper, Rhen, and his people from utter ruin.

I loved this book from start to finish! So much so, in fact, that I binge read it over a 12 hour period (I did sleep in the middle of those 12 hours) and immediately went online to pre-order book two! It has been a while since I got super feelsy while reading a book (unusual for me, since I cry at just about everything), but this had me emotional several times over and I cried big ol’ crocodile tears at least three of those several times.

Let me start by saying that this book did not reinvent the wheel as far as plot goes. It was a Beauty and the Beast retelling at the core, and it even had some ACOTAR vibes to it. However, beyond that basic framework was something lovely and new. The world created was rich and the characters well fleshed out, main characters and supporting alike. I am not always a fan of when modern meets medieval, but this handled it pretty seamlessly and I appreciated that so much.

I really loved Harper, who was fierce and fiery and handled things pretty well, considering. I also appreciated that she had a physical disability that was addressed with tact. I was also so glad to read in the acknowledgements that the author had really done her research on cerebral palsy and pulled in some folks with first hand knowledge to ensure accuracy. I loved Harper’s wit and her desire to help these people even when she has been ripped from her family.

Rhen is the perfect broody cursed male lead, and I loved that his Beast curse was unique. He definitely had the spoiled prince thing going on, but you could tell he was at a total loss at how to fix things. The relationship development between he and Harper was well done and had the slow build you expect from a BatB retelling. 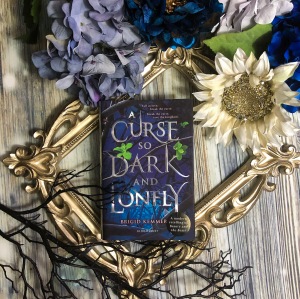 Grey was an unexpected almost-MC who super added to the story. At first I thought we would have some sort of love triangle there, and I think it would have been easy for the author to go that route, but instead she kept the romance between Rhen and Harper and that allowed for a different relationship to build. Grey is definitely the knight in shining armor in this story, and I was super excited to find out that the sequel brings him in as a full-fledged MC. I won’t spoil anything, but there is quite the plot twist involving him AND a pretty great cliffhanger.

Every retelling needs a great villain and this book brings us that, for sure. Lilith is a stone cold witch and the reason for the curse in the first place. We do get some insight into her background and what drives her, and that just solidifies how evil she has become. Throughout the book we see her torture Rhen (and even Grey) and relish in his pain. She’s sadistic and cruel and you feel zero pity for her. She had some serious Amarantha (ACOTAR) qualities and that made it all the better for me. I don’t trust her one bit.

Overall, this book had me captivated from beginning to end. I cannot wait to dive into the sequel, and will certainly be revisiting this book again and again!

What author do you own the most books for? JKR leads the pack for me (I have a lot of sets of HP, sorry not sorry) but Cassie Clare is a close contender!!! I am super excited for Chain of Gold to release in a few weeks!!! 🖤🖤🖤 Thank you to everyone for being patient with me while I’ve been on hiatus! I really do hope to return more consistently, but I’m trying not to force myself! Just send good juju and cross your fingers with me 😉 🖤🖤🖤 I know Kitty looks pissed off here, but I swear she’s actually the happiest bean ever. She refused to move, so just became part of the photoshoot. I’m not mad about it 😂 🖤🖤🖤 #clockworkangel #clockworkprince #clockworkprincess #cityofbones #queenofairanddarkness #cassieclare #shadowhunters #theinfernaldevices #thedarkartifices #themortalinstruments #bookish #bookstagram #bookhoarder #shelfie #catsofinstagram #booklover #bookstack #RenewAnneWithAnE #bibliophile
What’s everyone been up to lately?!?? I’m just popping in to say hello and explain my relative absence. 🖤🖤🖤 I’ve been feeling increasingly burnt-out with instagram over the last few months, and finally decided it was time to let myself take a break. It’s been a huge relief not to have to think about planning and taking pics, making posts, etc, and I’m so glad I have taken this time. I’m not quite ready to come back fully yet, but hopefully soonish! 🖤🖤🖤 What have I been doing instead, you ask? Well, surprisingly not reading!! I mean, some for sure, but not as much as I usually would. Mostly I have been working hard on the #RenewAnneWithAnE campaign on Twitter, which has been amazing and exciting and fun! It’s been interesting to be embroiled in a fandom that isn’t the bookish fandom (which we know can be toxic at times) and Twitter has been a learning curve. However, I’m loving it and it’s great to have some of my passion back. 🖤🖤🖤 So for now, know I miss you all and that I’ll def pop in from time to time to say hi and catch up! I am watching, even if I’m not participating! 🖤🖤🖤 This lovely candle is from @mlc_co and I think it looks lovely next to my selenite orb! MLCBUNNY for 10% off! 🖤🖤🖤 #mlcco #mlccandle #darkarts #bookish #bookishcandle #selenite #shelfie #booklover #bookhoarder #bibliophile #reading
What type of animal would you bring with you to Hogwarts? An owl would definitely be useful, but I also LOVE my kitty and feel like I’d be sad without her. I can always use a school owl! 🖤🖤🖤 This awesome Owl Post candle is from @mlc_co and isn’t it lovely?!?! Scented as a blend of parchment, pumpkin, and vanilla, this candle is delightful! 🖤🖤🖤 Use my code MLCBUNNY to save 10%!!! 🖤🖤🖤 #owlpost #harrypotter #potterhead #hpforlife #bookishcandle #candlehoarder #mlcco #mlccocandle #bookish #bookstagram #bookhoarder #booklover #bookaholic
Tell me something exciting or interesting thats happened to you this week! Not much here, other than still being deeply involved with the whole #renewannewithane movement. I’ll tell ya, I’ve been feeling SO disenchanted with instagram lately, and it’s nice to have another focus besides that. 🖤🖤🖤 Just a fun little pic of a few of my @mlc_candlecrate and @mlc_co candles! I definitely have like a billion of these, and love them so!!!! Ashley makes the BEST candles. Make sure you use my code MLCBUNNY next time you purchase some!!! 🖤🖤🖤 #mlcco #mlccc #mlccandlecrate #bookishcandles #harrypotter #owlpost #darkarts #miacorvere #nevernight #stabstabstab #kindredspirits #damesblanches #bookish #booksandflowers #bookstagram #bookhoarder #bookaholic #bibliophile #reading #read
What is something, outside of books, that you are passionate about? 🖤🖤🖤 I adore the covers for Skyward and Starsight by @brandsanderson !! I have the US and UK editions because I can’t decide which I like better and because I’m an adult and can spend my money however I choose 😏 🖤🖤🖤 #skyward #starsight #brandonsanderson #scifi #sciencefiction #yafantasy #bookish #books #shelfie #shelfiesunday #coverlove #charliebowater #reading #amreading #currentlyreading
Have you ever counted the books on your shelves? I never have and, to be honest, I’m a little afraid to do so! Idk why it scares me, but there you have it. 🖤🖤🖤 #bookstababesjan20 - Light the Way. This AMAZING Poe-inspired “and still I read on” candle is up now in the @mlc_co shop!!!! It’s an amazing blend of Bergamot and Autumn Pear and is LOVELY!! It’s the perfect candle for all of us bibliophiles out there! 🖤🖤🖤 Use my code MLCBUNNY to save 10% 🖤🖤🖤 #mlcco #bookishcandles #shelfie #edgarallanpoe #andstillireadon #bookstagram #bookhoarder #booknerdigans #booklover #bibliophile #reading #candles #candlehoarder #ireadya #bookish